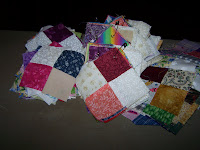 I finished step one of the Orange Crush Mystery. I think I'm going to call mine Sherbet Crush, or maybe Rainbow Sherbet Crush. I'm thinking Rainbow Sherbet and Orange Crush Float is a little too long. Anyway , it's 150 four patches with a two inch base square. I had a "leaders enders" project going which was an Irish Chain with a two inch base, so I pulled that out as well and used some of the leftover two square sub cuts to move a few four patches along to the next step.
Tomorrow is the local quilt guilds semi annual quilt show. I'm not a member because they seem to hold most of their meetings during the day (there are a lot of retired people around here). Apparently there is a waiting list to join, but you can get into some of the smaller circles without being a member of the main guild. Unfortunately their meetings always happen on nights when my husband is off playing volleyball, so I've never been able to try one out. I don't know why the idea of joining a group is so intimidating, but I just never quite manage to do it. I didn't realize that the show was this weekend, but my running partner called to tell me she read about it in the paper. She is not a quilter, but we worked together to make t-shirt quilts after our marathon. She just finished tying the final knot in her quilt and says she isn't ready to start another, but I was thinking of pulling out my running themed fabric to tempt her into starting something new.
Posted by scraphappy at 10:11 PM

Great job on the 4 patches!