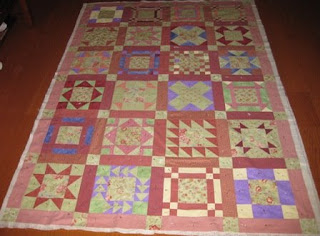 A massage would feel really good after an evening of crawling around on hard wood floors to baste the Tea Rose Sampler quilt. It is done now and ready to be quilted. Maybe I'll settle for a celebratory soak in the whilrpool. My sewing room is a bit of a mess, as is the living room where I lay out my quilt tops. A bit of putting away and organizing is probably in order before I start in on the quilting. I think I'll go see what I have for thread and stencils while I think about how ambitious I am feeling at 10:02 in the evening.
Kurt has just gotten back from his event. Another person from his company was retiring and he was recruited to sing at the party. He used to sing with a group when we were in Chicago, but it was barbershop with lots of other people. I guess he did sing with some quartets, but never alone, and never with musical accompaniment. They rewrote the words to Take This Job and Shove It along with some other country ballads. I was a little sad that I wasn't invited to come along and watch, but he said it went well.
Posted by scraphappy at 9:59 PM

Nice busy and ambitious night you've had! Considering you were heading out for McD's around 6:00, and started posting about your basted sandwich by 10:00.

The colors are soft and lovely. Sampler quilts may seem a bit longer to make, but they give they eye a lot to look at and enjoy! Your pieced backing will look lovely as well!

I'm fond of sampler quilts too, they always look so interesting. I love the colours of yours, it looks really restful and calming. It sounds as if your summer holiday has been just right - organising things to that they're tidy before school starts again; playing with your children whilst they're still young enough to want you to; taking time for yourself. Great!

I don't baste my quilts on the floor anymore. I take them to my church and when everyone is nearly gone, I go to fellowship hall and I push together two long tables and tape the backing to those. At least now the quilt is up off the floor, I can reach everything and am generally done in about 45 minutes for a queen sized quilt.

Which barbershop group did Kurt used to sing with? I just saw a New Tradition show (they were the guests of the local Sweet Adelines chapter show) and they have really changed. My step dad used to sing with NT, too. If its the same group, wow, what a small world.

I love the Tea Rose Sampler quilt! The colors are wonderful and oh so sweet. :D
Have a wonderful holiday!

The quilt is gorgeous! I HATE basting, it's the worst! I keep thinking when I am crawling on my hands and knees that there has to be a better way! But I haven't figured it out yet.