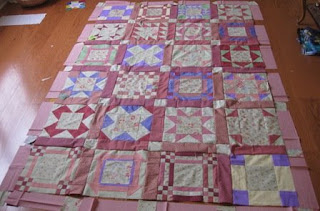 I'm so close to finishing my June UFO. I'm not sure why I have been so unmotivated lately. Maybe just because I can be. So I'll just pretend that June is a 31 day month and finish this one off before too much longer. I think I'll quilt it with a light green thread and put some sort of round motif in the middle of each square? I'll have to see if I have any stencils that will work for that. I'm not exactly thrilled with the purple, but at the same time it reads pretty flat and I guess that gives it a little interest? I seem to enjoy the idea of sampler quilts much more than actually finishing them off. Somehow they take so much longer than regular quilts. I've still got the Starlight quilt out in the middle of the formal living room, so I should do something about finishing the border up on that. I could even pull out Double Delight and finish all three borders at the same time! On second thought, maybe that is too much ambition. I would like to get some of these checked off the list so that I can switch gears for a bit. I've had a number of requests for non-quilt sewing. It might make me nervous to sew on things that are not flat.
Summer has been peaceful around here. There are no more trips planned in the near future, and most of our summer camps are finished. We've been having play dates, sleepovers and even a few days of hanging out around the house. I've haven't accomplished any major projects, but I've had plenty of time to putter on small things. I organized part of the garage and laundry room, and sorted through clothes and closets. It is nice to be able to just hang out with the kids for a while, especially now that they are getting past the point of needing constant supervision.
Posted by scraphappy at 3:08 PM