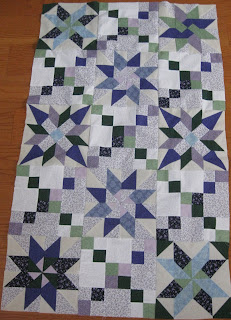 As summer winds down and I know I should be putting away my summer projects. Finishing up loose ends. Tidying away the sewing room. Instead I suddenly decided that I didn't want to miss a month of the UFO challenge and that I should really take another look at the July project. I had 8 blocks from a BOM many years ago. I picked a more challenging pattern than I was ready for and was not happy with the way the blocks were coming together. It got put away, and by the time I took it out again, the room it was being made to match had been redecorated. And so it sat and languished. I didn't want to devote a lot of time and energy to a quilt that I have no earthly purpose for anymore. After playing with the blocks, I decided I could stretch the existing blocks by whipping up some Irish Chain blocks to alternate them with. I did that yesterday, and just finished putting them together in a 3 x 5 setting. With the blocks finishing at 12 inches, that only makes it 36 inches wide. Not enough to comfortably snuggle with (unless you are really skinny I guess). So now that I have put this much time into it, I'm thinking that I could make 2 more star blocks of some sort and three of the Irish Chains to bring it to a small snuggle size. I could also just start randomly adding the extra four patches to the sides until I run out. I guess I'll sit here and stare at it until inspiration strikes. Inspiration better not take too long though, there is only one more day in July! 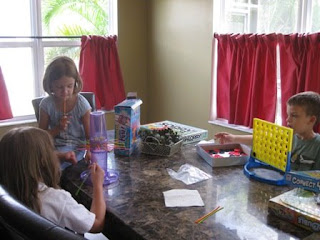 The kids have all been adding their own chaos to the mix. They are tearing up the house to pack for their trip while trying to make sure they play with every single friend and every single game and toy before they leave. Sydney had our new neighbor over yesterday and they played Clue, Sorry, Trouble, Kerplunk, Connect 4 and Martian Matter all at the same time. If only I had waited one more day to mop the kitchen floor! It truly is insane around here. All in a good way though.
Posted by scraphappy at 4:45 PM

what if you add piano key border on the two sides to give it more width and then bind it and call it done...

Did you have more of the same fabric to do the Irish chain squares, or were you just lucky with the colours? The blocks go together perfectly.

I like that star quilt, I really like the colors in it! Do you have enough to add 3 more stars and 2 irish chain, if so I would!

I love your quilt and I admire you to be able to come up with an alternative to make it bigger like you have. I have to have a pattern and the only extra thing I can come up with would be applique or an extra border.
Seeing your children at the table palying games sure brings back alot of memories of when my kids were small. We loved playing games! Now they have kids of their own. Thanks for the memories!