I spent most of last week sorting through the scrap basket and turning everything into squares and strips. I'm trying to get the study and laundry room organized again. I'm getting very close to being done with the Sister's Choice blocks, but I got sidetracked.
Kurt has decided he wants to work on redoing the toy room. We've moved out the very scary old couch and replaced it with some chairs for the kids. Now that I think about it, we ordered that couch from Montgomery Wards for our first apartment 15 years ago. When we moved into this house(5 years ago), I had intended to make cushions for the top of the toy shelves. I made a prototype, but Kurt thought it was too flat, and so we've only had the one sad little cushion for the last 5 years. So when the couch made its way to the curb, I grabbed out the cushions and cut them to fit the top of the shelves. Then I spent yesterday sewing covers for them. I was pretty happy with how they turned out, but Kurt constantly fails to be impressed with my abilities. He just looked at them and said, "Yea, but I've seen you make things lots of times." So anyway, there they are, 14 linear feet of unimpressive matching cushions.
Next on the agenda, to do something about the curtains he doesn't like because they are too hard to open and close. I wish getting the kids to pick up all the toys was on the list somewhere, but that seems to be a losing battle. We spent hours up there on Thursday and it was perfect, now it looks (again) like something exploded. 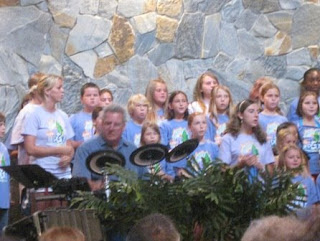 This morning we went to church to watch Anna sing her songs from VBS (vacation bible school) last week. They had a picnic afterward and Sydney has now decided that we should go to church all the time because she likes cotton candy and snow cones, even though she didn't want to sing all those songs about God.
Posted by scraphappy at 6:39 PM

Plenty of us are impressed with the things you make. The cushions are cool, and without a couch the kids have more room to play.
Any reason to get the kids to church. God has a way of sinking in.

Angela, your sarcastic sense of humor simply cracks me up! :0) And yes dear, the "not so impressive" cushions are.......impressive :0)

Thanks for admitting that your children clutter everything up too; I was hoping mine weren't the only ones. I wish I didn't get so stressed about clutter, and I've gotten much better at "letting it go," but.....ugh! It's annoying tucking them into bed and then stepping on umteen toys on the way back to the stairs!

great cushions! what a wonderful way to recycle!