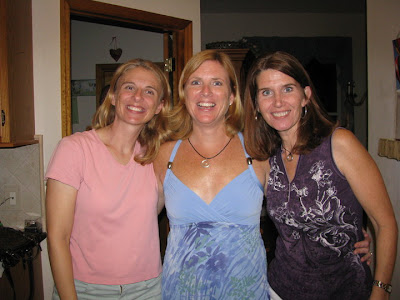 Last night was a 40th birthday party for my friend Ashlyn. It was actually the second 40th birthday party for her, but the first was a surprise. She's the one in the middle wearing blue and Meisje is on the other end in purple. We used to all run together, before we got old and worn out.
Kurt took the kids all to beach volleyball this morning and I went in to school to get some prep work done. It is amazing how much easier it is to get things done when there is no one there to chat with. I've still got two more days to get everything ready, but orientation will be going on, so there will lots of people around. 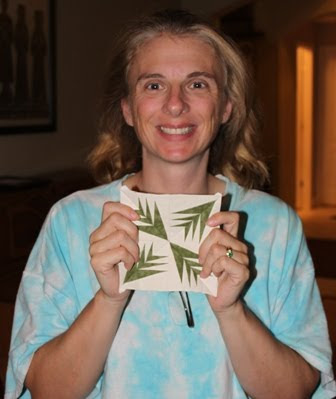 I lounged by the pool and stitched binding while the kids swam after lunch and then went out for groceries with a quick pit stop at Hobby Lobby. I've got my eyes open for small scale prints that will work with the Midget Blocks. Then after the kids were settled all snug in their beds I started on block number 6. It is called Palm and seemed like a lot more work than it was worth for a design that isn't visually complex. There are 56 pieces and lots of sharp little points. 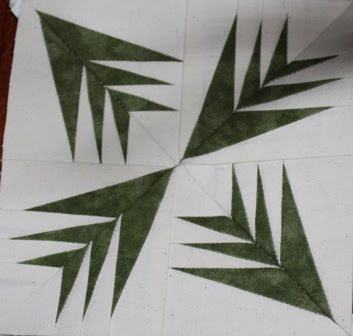 Maybe it would look better with three different greens in graduated shades? The seams are pretty bulky and it doesn't really want to lie flat, but maybe when the dissolvable paper goes away it will look a little better.

Posted by scraphappy at 6:50 PM

Sounds like a nice, productive day. That block is wonderful!

Aren't schools wonderful places when there are no youngsters there! The block looks very effective in a photograph.