I haven't gotten tired of these little cuties yet. If I had discovered them at the beginning of summer vacation instead of the end I think I'd be done by now. It helps that at the beginning days of school there aren't a lot of papers to correct yet. Also, my beginning of the year lesson plans tend to be much more organized than my end of the year plans, allowing me to just pull out the plans and make minor tweaks. 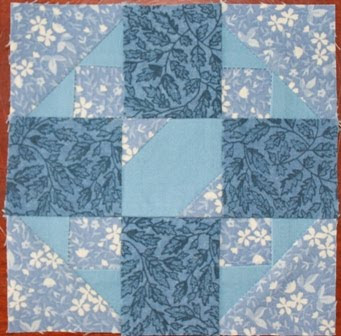 I worked on block number 18 this afternoon, and that went so quickly that I had time to throw together block 19 before the school bus got here. The kids have just finished homework and I'm sitting next to the pool supervising the swimming whilst updating my blog. I'm feeling pretty good about my life right now.
So back to the blocks. 18 was easy enough, but for some reason the paper pieced segments came up just a little bigger than the rotary cut 2 inch blocks. I squared everything up by shaving off miniscule bits before putting them together. The contrast is low, but I guess they can't all stand out, right? 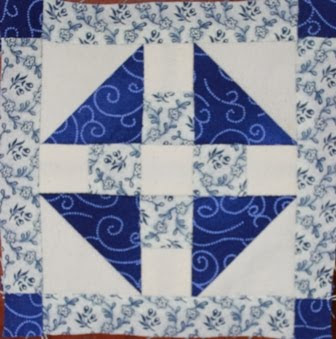 Block 19 is adorable I think. Except for the border it is just a churn dash block. Right? I cut the half square triangle pieces just a bit big so that I could square them up which I thought worked out well. The border segments were supposed to be background colored, but I had just enough from a 6 inch charm square of fabric and decided to make them light blue instead. I think it looks good that way, don't you? I always wonder on little blocks like this if the original quilt maker just didn't want to do the math to make it without a border or if she wanted to add the extra color to the edges. 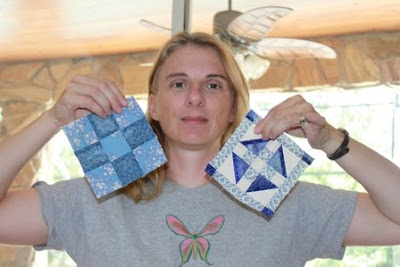 Either way, 18 and 19 are done. Block 20 looks a little scary. I've pulled the fabric, but I might have to work up my courage for all those itty bitty curved triangles.
Posted by scraphappy at 3:20 PM

They're wonderful. You have such patience to work with those tiny pieces, but it obviously is something you are enjoying.

It's such fun to see all these little blocks appearing and to read of your enjoyment in making them. I wonder how many you'll manage to make before school life takes over?

On a side note, I have tried to respond to several of your emails and I get an error. It looks like your email doesn't like my email. :(