Harder than it Looks 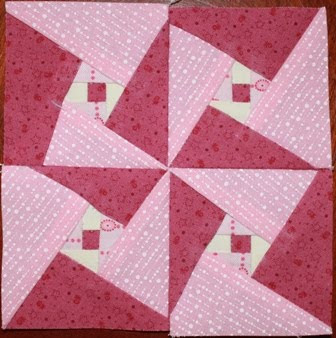 I like patterns that are easy but look hard. This one looks simple enough, but it was impossible to put together. The pinwheel triangles should be easy enough to put together log cabin style, but there isn't a spot to start and stop. If you look really close at the white bits in the center, you can see that I cheated and cut off one of the corners to have a starting point. Think about how a traditional log cabin looks, the logs aren't all the same size. Even a courthouse steps arrangement leaves two sides shorter and two longer. 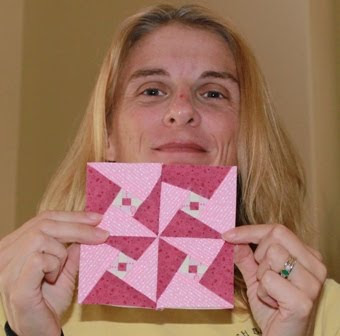 Not knowing how else to approach it, I tried to do a partial seam. Have you ever attempted a partial seam on a paper pieced block with a finished size of 2.25 inches? I wouldn't recommend it! 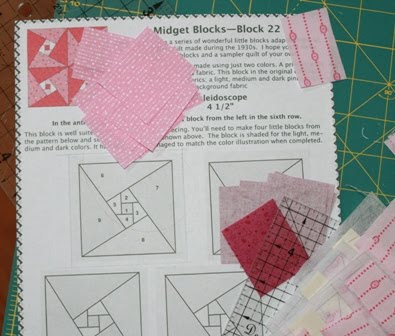 So, the angles are a little wonky, the lines are a little crooked, but until I can think of a better way to put it together, I'm calling this one done. I guess that is where the Dear Jane, "Better done than perfect" comes from. The longer I look at those outer triangles the more off they look. Guess I'd better go look at something else for a while.
Kurt was out of town all week and I was sure I'd find time during the evenings after the kids were in bed to put together a block or two, but by the time I got them settled and tucked I was about ready to be done myself. He called on his way home to tell me that he was supposed to be on another trip this week, but I think he's managed to put it off. I'm glad he'll be here for a while, this single parent thing is no walk in the park.
Posted by scraphappy at 6:18 PM

I hear ya about the pattern being a little off. I think that the adjustment that you made makes a lot of sense. Your block looks great!

I have a block similar to that which has a math formula for ...if you are interested

Good for you for persevering and finishing the block!

WHEW! Glad I'm not the only one who had (is having) a doosey of a time with this block!

First---I determined.....the "mirror units" were not mirrored on the pattern! That's why your triangles seem(ed) "off" to you with this block. I figured it out and I THINK I'm set with that.

Second---ummmYEAH! What is UP with those partial seams!???!?! Holy buckets!!!

I can definitely seem some alterations to this block! I hope to have it up and posted next week.

Whew---I'm glad you've gone through all these blocks ahead of time; you were so nice to do that for me. ;) Now, I have something to read up on as I make my way through mine :)