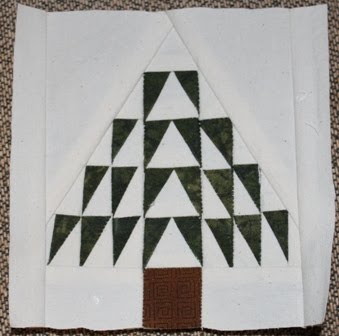 Block 16 was so not fun. I started with the bottom corners by making some nice little over sized triangles. Between the mirror image symmetry and the strange angles, I managed to sew two green triangles backwards and had to start over. 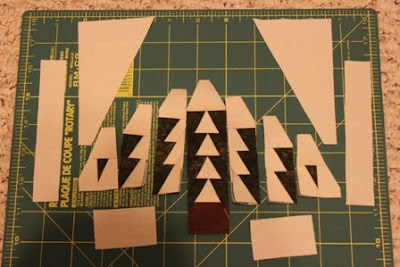 I decided to cut a bunch of rectangles 1.5 by 2 inches and use those instead. I'm sure the quilt police are having a hissy right now about the catty wompus grain lines, but look at the size of those little pieces -- it can't matter that much, can it? 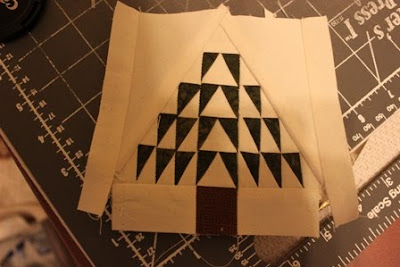 So after each of the subunits was done, I started sewing them together left to right, just like the directions said. Somehow that left me with inset seams along the bottom of the tree. I tried to make it work, really I did, but look at those funky angles! Instead I just pulled off those long skinny side pieces, straightened the whole thing up and sewed some strips on at the ends. It wasn't until I was taking the picture at the end that I noticed that the tip of the tree was supposed to be green. Whoops. 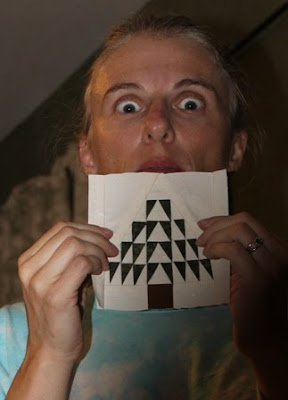 I would have skipped this block for sure if I wasn't going in order. I'm glad it is done now though, and I can move on. The next block looks super cute and much easier. 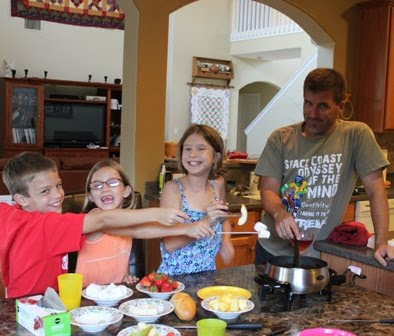 Anna has been asking for a long time to go out to the Melting Pot as a special night out. Kurt isn't so much in favor of spending that kind of money, so instead we got a fondue pot for home and had our own Melting Pot dinner at home. The kids all thought it was great fun and want to do it every week. They already have the menu planned out for the next few sessions and it all sounds delicious.
Posted by scraphappy at 9:56 PM

Color the triangle with a green sharpie! And Kurt looks thrilled in that picture!

I know just how you feel with that block, after making my waistcoat some months back that had such tiny, tiny paper pieced blocks. What a pain about the tip of the tree. I was going to suggest colouring it in too, and then you could put a gold star sequin on the top to cover up most of the colouring.

The block looks good in spite of the trouble you had! mmmm.... fondue!!!