Ryan is home sick today and I volunteered to stay with him to keep an eye on his fever.  His fever is under control and I've spent the time in between making quilt plans. 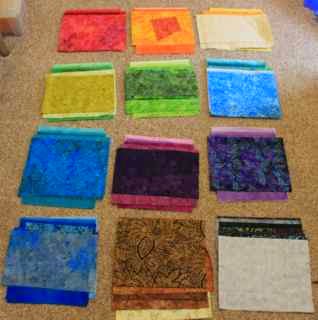 I was lucky enough to get a beautiful assortment of hand dyed fabrics from Vicki as part of last year's Rainbow Scrap Challenge giveaway.  I was waiting for just the right inspiration and felt terrified to cut into such gorgeous fabrics.  I had a light, medium and dark color wheel stash pack to which I added a few coordinating batiks.  There is fabric enough for 13 blocks, I'll have one extra at the end just in case, and best of all, after making the blocks, there will be plenty of extra fabric to incorporate into next year's challenge blocks! 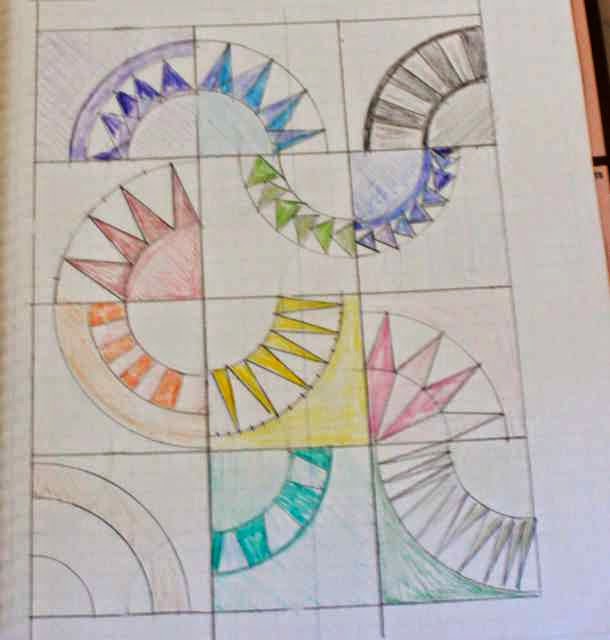 After playing with a sketch book and making a practice block over thanksgiving, I finally felt ready to jump in. 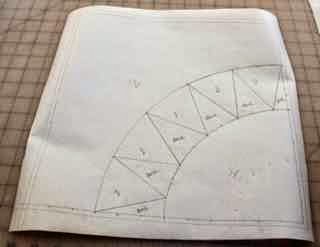 So I started by sketching out a paper piecing template on a large piece of freezer paper.  Not having a large enough compass, I used the handy pencil and string method of drawing two arcs.  I used a protractor to make hash marks each 9 degrees and then used those as a basis for 4 whole spikes and two half spikes. 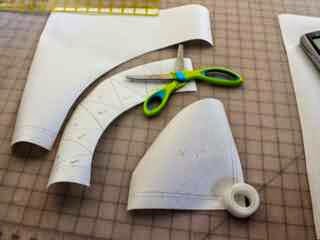 I cut those apart carefully on the curved lines, leaving plenty of room around the outside for seam allowances and squaring up. 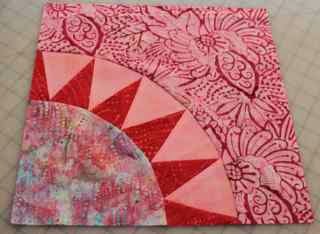 After that I ironed the freezer paper to to the outer in inner circles and paper pieced the center arc.  Easy peasy?  Well, not too bad anyway.  It helped to leave plenty of space around the outside for squaring up later.  I'd like each block to be different.  Maybe flying geese for the next one?  Best of all, the fabulous fabrics are getting put to good use instead of hiding in a cupboard. 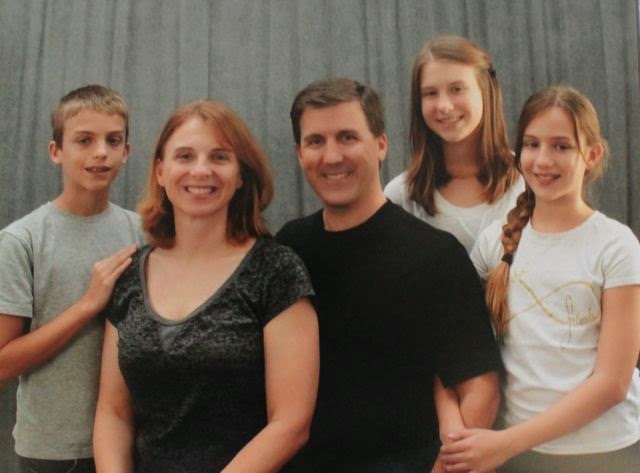 We had family portraits made over Thanksgiving break.  That was before Ryan started hacking up a lung and Sydney started tossing her cookies.  I think the in-laws were pretty glad to see us head out the front door.
Posted by scraphappy at 2:32 PM

That is one good looking family! Your block is lovely... I've been wanting to make one of those spikey patterns for years - still on my quilty bucket list. Guess I'll watch and see how yours works out.
Hugs

I hope everyone is feeling better! I love the project you've designed too.

What a beautiful family. Hope everybody is feeling better! Love your NY Beauty. This is one of my all time favorites. I made a 4 block wall quilt last spring and I just love it.

The kids are growing up! Great family picture. Cannot wait to see that paper peicing come to life either!

Sounds like an awesome project.
What a beautiful family you created!

Great looking block - I can't wait to see where else your imagination takes you! Lovely family portrait, too! Hope everyone is on the mend and you don't succumb to whatever the kids have.

Oh, who doesn't love a NYB? You are brave and talented to draft your own pattern.

And what a great job you did draughting it. I like the idea of all the blocks have different patterns. Good idea..

Awwwww! What a wonderful family picture! I'm pleased to hear it happened before all the illness ickies hit :\

WAY to go designing a spectacular, modern, UNIQUE design. That is going to be SO WAY cool! Can't wait to watch it come together. Excellent sickday productivity.

Beautiful family! I hope everyone is well soon. Cool blocks. Awesome fabrics. It will be fun watching this one come together.

Ooh, I love New York Beauties! Yours will be spectacular! I hope your family is feeling better soon.

Count me among those that LOVE this new project idea. I designed a bunch of these blocks to hand piece ovre the summer and seeing your project makes me want to get back to them ...

Love the block and looking forward to seeing more. Such wonderful inspiration!

You have a lovely family!

Those blocks are going to have some serious wow factor! Love that first one.

It must be the time of year for colds and such. Hope Ryan is feeling better. Drama Teen went to bed with a sore throat and a stuffed up nose. Hopefully she'll make it to school today.

Great picture Angela!!!! So funny ... my husband and I got sick with colds over Thanksgiving too, and my mom was SO glad to see us leave :) We're best friends and only see each other a couple times a year, but at her age, you don't mess around with the potential for nasty colds.