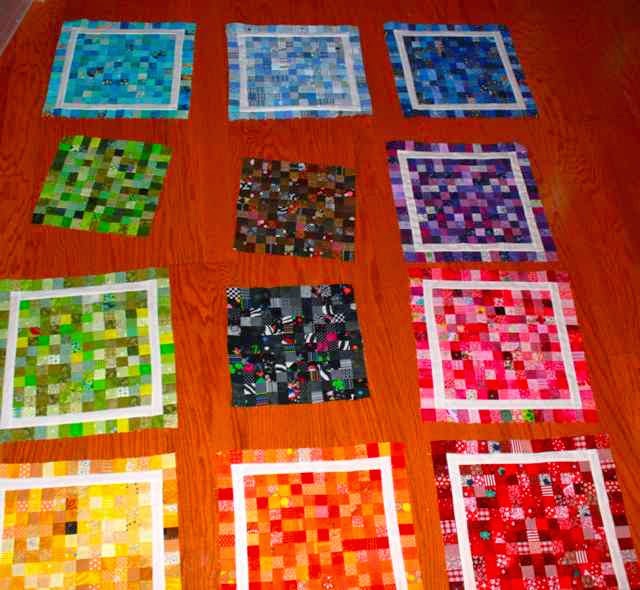 I thought I would whip up three blocks on Saturday, leaving Sunday open to work on my new sampler or NYB blocks.  Not quite.  The three postage stamp blocks somehow took all of the weekend.  I also did lots of scrap sorting and cutting.  All that remains is to add a border to the last few blocks and then figure out what to do with sashing.  I was thinking of white, grey white stripes with nine patches in the corners.  It might be too much though.  I always think that I want rainbow cornerstones on rainbow quilts, but I never end up liking the way they turn out.  Maybe I just don't have the right rainbow fabric.  It is the last week of school before winter break and exams started today.  Serious crunch time for the kids, but I've been catching up on lots things while they played review games.  Yesterday was catchphrase and today was pictionary.  My file cabinet is no longer overflowing, and I am almost out of piles of papers to deal with later.  Almost.
Posted by scraphappy at 5:54 PM

I really like those blocks a lot. I'm not sure what I would for cornerstones either, but I like the idea of a grey or white sashing. Now that I've moved and settled in I plan to dig into my scraps and sew along with you next year.

Glad you were able to put some time into working on these blocks. I always want to use rainbow cornerstones too but I can't seem to make them work either.

I love what you have done with these blocks Angela. Much nicer than simply sashing them.

Drama Teen is laboring under the finals crunch too. I helped her with chemistry last night, poor kid needs to go back and memorize all her metric to US conversions and a few other key constants.

The blocks are beautiful! I tend to be impatient about sashing, but the stripes sound great..

School is almost done here too. I can't decide if I'm excited or dismayed as I'm busier when everyone is at home!

I'm not sure I'd add the cornerstones ... but maybe they could be 4-patches (or 16-patches) made from the four colors in the blocks they touch?

It will be gorgeous whatever you do!