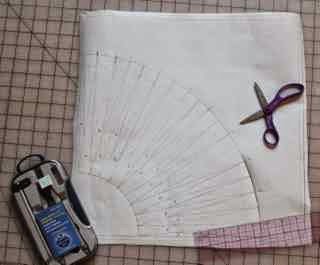 This block should be called, "Not Quite as Planned".  I started by drafting a very spiking New York Beauty with dimensional points tucked behind the main points.  I marked every five degrees and started drawing.  I thought it turned out pretty well.  Anna and Sydney helped choose the colors, rejecting the more ocean colored greens in favor of the lime variety. 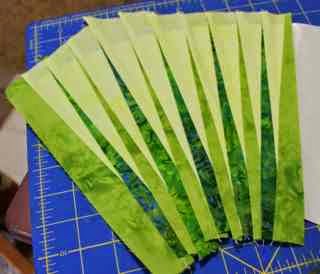 The greens are both hand dyes by Vicki, and there is a batik for the darker spike.  As soon as I started to sew, I realized that the whole spike behind a spike idea was not going to work.  I've done enough paper piecing that I should have recognized inset seams in the design.  No problem though, I am adaptable, alternating spikes are almost as cool as dimensional spikes, right? 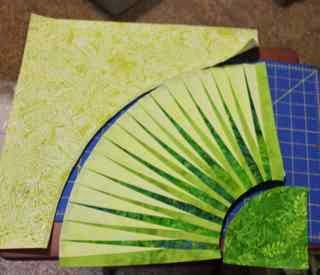 So I sewed and trimmed, and ironed.  After the spikes were done, I trimmed out all of the pieces and sewed them together.  Not my best curved seams, but they came together.  As I laid it out for final squaring up though, I couldn't figure out why the edges weren't quite working out.  Apparently I drafted the original template at 15 inches instead of 12.  Really?  How could I not notice such a thing? 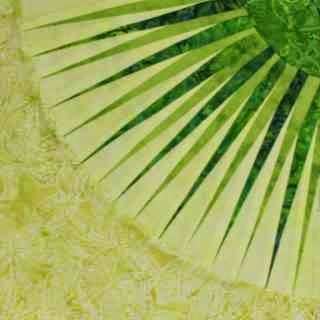 So the angles are a bit wonky, but after sewing all those spiky points, there was no way I wan't using this block. Maybe I'll move it into the corner of the quilt. 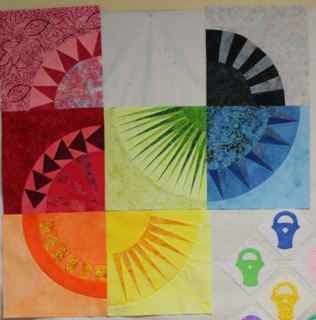 Here it is added to the collection so far.  I think double flying geese are next on the list.  Hope you are all enjoying your winter holiday time.  I went with Sydney and her friend Bethany to see Into the Woods yesterday.  It was a lot of fun.  Sydney and Bethany wanted to sit alone together though, so I sat with Bethany's family.  Kurt made prime rib on the green egg for dinner.  It was the first time he tried it and it was delicious!  We will have to try that one again sometime.  This morning I took the girls shopping for some fancy cruise dresses.  Kurt and Ryan went to volleyball and got haircuts.  Now they are all scattered allover the neighborhood playing with friends.  I feel sleepovers coming soon.
Posted by scraphappy at 3:30 PM

Glad you had fun with that block. It is a lot of work and lovely. I like the greens

What intricate piecing! Just how wide is each little spike? Love the greens.

I love this block with the greens!!!! Beautiful colors.

Amazing how our plans change and we still get an awesome looking block! Greg was watching Alton Brown do a prime rib last week..... I'm thinking New Years =) Enjoy the cruise and those orange peels.

The green American Beauty turned out nicely even with the change of plans.

Oh a whole lot of my blocks do not turn out as "planned"!! I love that green "Beauty".. the colorways are great...hugs, Julierose

Your block turned out beautiful. The greens are gorgeous!

I love beautiful things and beauty products. I have the whole room filled with various jars of creams and perfumes. And recently I discovered false eyelashes. I draw thick arrows on my eyelids and glue the lashes to the edge of the eyelid. It looks really cool. Want to repeat? Then examine the link to learn more about false eyelashes and cat eye makeup.

That looks amazing! You know, my sister is also very creative and she likes to create such beautiful things but she is bad at writing, so I have to order all her essays on https://paperap.com/essay-plagiarism-checker-students/ but It is worth it

such a beauty! I also have many hobbies but sometimes I feel really stressed and just can't do nothing, then I use some treatment, many tips you can find here https://wayofleaf.com/