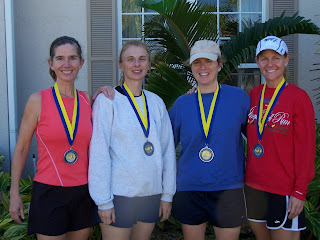 As promised, my ride to the OUC half marathon showed up at 5 a.m. on the dot. I am so thankful that I didn't have to drive that I never even complained about the early start. We timed things pretty well because we had just picked up packets, chip timers, checked bags and used the facilities when the gun went off. Actually I had just gotten my turn when I heard the gun and tried to hurry things along as best I could. Being a chip race, it didn't matter that we weren't first past the start. Meisje was kind enough to organize this whole road trip. Ashlyn did the same race with us last year, and Amy was along for the first time this year. It was a beautiful day for a race, just a bit chilly and overcast. I thought for a few minutes it was going to start raining on us at about mile 9, but it never materialized. Ashlyn and Amy both wanted to finish below 2:10 and Meisje was going to give the Galloway method her best shot to prove that it was a viable marathon strategy. My plan was to start running and see how things went, I still want to break 2 hours at some point, but having not run a step since my 2o miler last week, I wasn't sure today would be my day. Meisje and I stuck together for the first 7 miles or so, walking at each water stop, passing the others and then falling behind as we walked and then ran again. Meisje got some serious energy going and started to pick up the pace after the halfway point, doing sub 9 minute miles and losing time at each split. I decided not to try to keep up with her and dropped back as she powered ahead. I plodded along, keeping a steady pace as first Amy and then Ashyln passed me by. I finished in a still respectable 2:07:40, 4 minutes behind my pace last week, and last of our little group. Every one was pleased with their finish times. Meisje came in at 2:03 something, just 15 seconds off her PR time, despite having walked every mile. Amy came in at 2:05 something with Ashlyn shortly behind at 2:06 something. We even had time to stop at McDonald's on the way home! I have developed a habit of stopping for unhealthy food on the way home from races. Something about the hot grease and salt just hits the spot at those moments. People wondered a bit about the four of us in our sweaty race gear with medals around our necks. Let them wonder! A marathon medal can only be worn for a short time, when the race day is done, it is left to hang as a dusty reminder of races past. 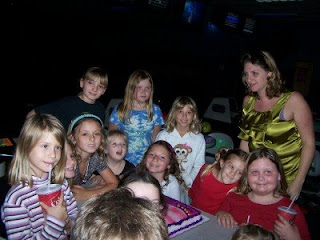 I got home in time to shower and kiss Kurt goodbye as his ride came for the airport. He'll call us from his layover, but I think it will be too late by the time he arrives at his destination to talk. I was carpooling to the birthday party, so we all pulled out at the same time as Kurt and his coworkers. It was a bowling party at the air force base, so we allowed extra time to go through security and get checked in properly. The birthday party was as calm as any gathering of 17 young children full of soda, pizza and cake can be. I was drafted to help out, and so did quite a bit of scurrying getting shoes, lining up lanes, distributing food and such. It is amazing how many children will burst into tears when faced with a dismal bowling score.
We are home again at last, full of birthday party food and wondering if we should try to eat a nice healthy dinner. I'm voting for pajamas and a good snuggle in a warm bed before it is time to put the kids to bed. Then I'm going to enjoy a nice hot whirlpool bath and try to get my tired legs energized enough for a new day.
Posted by scraphappy at 5:39 PM

Hey hun....catching up on your life this past week since I "haven't been around."
first---huge hugs on your Half! Seeing you all in shorts makes me chuckle! We hit the first official "below zero" day yesterday with -2.6 degrees!
second---wow! excellent progress in all the lap quilts! I am also positive the final goal of 40 will be met---way to go!
Finally---hopefully your vote of PJ's, warm bed and whirlpool bath came true! I can well imagine your exhaustion after the race and the full day of activity!!
Happy Sunday-----

What a day! I hope you have recovered now.

Whether you have chosen the Java or the downloadable version, https://thaicasinomaxi.com/ you will have to create an account at the chosen casino. The account that you create will allow you to play on both the downloadable and the Java version of the casino. Y