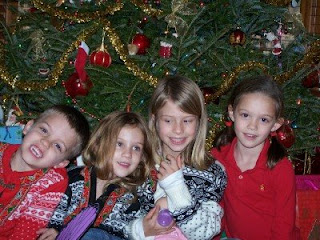 Our second Christmas was on Christmas day. After Santa came on the 24th, we were off to Georgia to see Mom and all the aunts, uncles and cousins on our side. Everyone was happy and healthy this year, and very happy to be together. We've been trying to reign Noanie in on the gift giving for years, and I think this year we finally managed to achieve our goal! I knew it had gotten out of hand when the kids skipped making a Christmas list for Santa and sent it to Noanie instead. There were still plenty of gifts for all the kids to enjoy, but not so many that they were overwhelmed. The girls all got Barbie mp3 players that have not been off their ears since, and the boys got wall climbing cars that are just really cool. 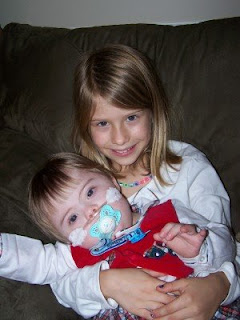 All of the kids spent some time with Zach, who is very interactive and getting around really well. He is on oxygen all the time, but just crawls all over the place knowing that someone will carry his tank over when he runs out of tubing. Anna wanted to hold him like a big baby doll, but he was too busy exploring. Ryan sat on the floor with him rolling a ball back and forth and practicing the signs for "play" and "ball. Sydney was very curious about why he ate through a tube, and had lots of questions.
Tom outdid himself on Christmas dinner as usual. I was second in command and had such critical tasks as peeling apples and stirring sauces. There was a pear and fig stuffed pork tenderloin to go with the prime rib as well as fettuccine Alfredo with shrimp and scallops. We even made a homemade applesauce for the kids. He finally decided, as a concession to the kids, to do the dinner buffet style, which is totally contrary to his gourmet tendencies, but it is easier. Maybe when the kids get a little more independent we can go all out on the presentation again. After diner was a "Chinese" gift exchange for the adults and stockings for the kids. We finished the evening off with a holiday Pinata. We've had one for the past three years, and it is just way too much fun.
Christmas number three is still on Kurt's camera, so I'll post about it next time. For now we are all home again and happy to be settling back in. Today we worked on the traditional post vacation laundry and unpacking as well as getting a LOT of painting done. I think we'll be able to finish off almost everything tomorrow if we keep making such good progress.
Oh, I almost forgot to mention -- I finished off the last Twilight book last night! Wow, that was so much fun. I love "discovering" a series when there are already several out there, ready to be devoured in a big reading marathon. I have to make plans now to go and see the movie. One of my running partners, Ashlyn, is willing to go with me, even though she has already seen it, she is a big fan and is going to keep me company.
Posted by scraphappy at 8:25 PM

Yummy. Your Christmas dinner in GA sounds great! You have my mouth watering.
I am on Book 3 of Twilight. I have been trying to catch up on Lynnette Anderson's Noah's Ark embroidery block of the month (I was only 10 months behind. lol) and have not read as much as I should.