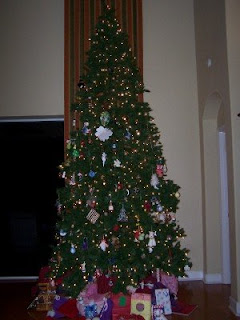 I am already on Christmas number two for the year, but realized I haven't reported on the first Christmas yet. I thought it was only kids from divorced families that got multiple Christmases every year, but mine have come to expect it.
Christmas number one came on December 24th. That was the "real" one. Cookies and milk, stockings hung with care. Anxious children herded off to bed. Thanks to the invention of Santa Sacks, we had the wrapping done in plenty of time and stockings stuffed with gifts gracefully stacked under the tree. It doesn't really matter how many gifts are under the tree, they always look small compared to the size of the giant tree. We used to have a regular sized tree, but it always looked silly compared to the really tall ceiling in the family room. 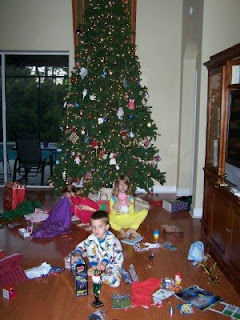 The children followed the rules, remaining in their rooms until we fetched them at the normal time. I am not one of those mom's that is willing to be awoken at 4 a.m. by children reporting that Santa has come. The rest of the morning was spent playing with new toys, checking them all out one by one. My new Wii fit was a big hit, although I didn't get much time to try it out yet. I was hoping it would help me get some sort of exercise when Kurt goes out of town. About the time everyone started to get tired and grumpy, we loaded them into the car and took off for "Noanie's house." Noanie is my mom, she lives about 8 hours away. My brother and sister both live much closer to her than I do, so they all converge on Christmas day after opening their own Santa gifts. It was a blissfully uneventful trip, the kids slept a good portion of the way. I took lots of pictures today, but they aren't downloaded yet, so I'll report on the next two Christmases later.
I hope everyone had a great day and was able to spend time with family and friends.
Posted by scraphappy at 8:56 PM

Merry Christmas. I hope the rest of your vacation will be relaxing and peaceful - and happy!!
BTW, your house is looking good.

By now you're other C'mases are probably over, and hopefully your ride back home will be will be uneventful as well.

So, you going to take part in the New Year's Mystery? BTW---we had school on Monday and Tuedsay; then off until 1/5.
Happy Vacation :0)