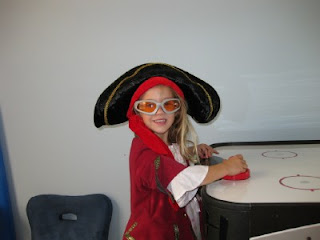 I hope everyone had a wonderful weekend. We had a relaxing time staying at home. We went to share the Thanksgiving meal with our neighbor, but otherwise spent time as a family. I managed to burn the pies by moving them to the bottom rack to make room for the back-up turkey, but I guess there are worse things than burnt pie. Sydney had a ball playing in someone else's toy room and had be drug out at the end of the evening. Pirates and star wars are the little boy versions of princesses and ballerinas for dress up clothes. 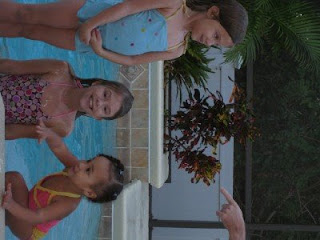 The kids decided to have a swim after dinner even though it was really too cold. They all warmed up afterwards with hot chocolate and lots of whipped cream. (I'm not sure why the picture is sideways, we got a new camera and I'm still figuring it out)
I did a bit of shopping with the same neighbor yesterday, starting bright and early at 4 a.m. For those people outside the US who are unfamiliar with Black Friday, it is the traditional begining of the shopping season. Retailers try to lure people out of their toasty warm houses in the wee hours of the morning with promises of ridiculously good deals on various consumer goods. We weren't up quite early enough to nab one of the $348 laptops, but managed to find a few bargains and still be home again by the time everyone else was awake.
I'm off tonight to the pre-race pasta dinner. It will be an early night before tomorrow's 6 am race start! They move it up earlier every year, trying to get the finish in before the heat is too bad. I hope it is cooler than last year, a lot of people only did the first half because they were too warm at the turnaround to finish the whole marathon.
Posted by scraphappy at 4:59 PM

Good luck on the marathon.

I've seen several people mention Black Friday and wondered what it was - why 'black' though? Lots of luck with the marathon, I really hope you manage to get finished before it gets too warm.