If Every Day Were Saturday

There was a 15 K this morning that everyone was running, and I really should have done it, but Ice Skating doubled up with Cub Scouts this morning, and two parental units were needed to make all of that happen. After that, I spent the afternoon getting ready for tomorrow's big quilting extravaganza. I was afraid our troop wouldn't get enough done, so I invited over another troop to use as extra help. Miss Sheila came over after lunch and we got the backs pressed, the batting layered and the bindings pressed and ready to go. When my troop worked on the quilts on Monday they had trouble getting the first strip to lay flat and true. Hopefully the preparation will make the actual quilting go more smoothly. We'll be quilting from 1 to 4 and then skating from 4:30 to 6:30, so the afternoon should be busy. 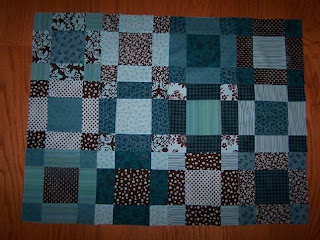 After the prep work, I went ahead and chained through some blocks that had been laid out earlier. I got some 10 inch squares from Keepsake Quilting a while ago and went ahead and layer cut those into a modified 9 patch. I think there used to be more brown blocks, but I stole them for the OHR quilt. I'll come up with something for a border on this one and it will be just the perfect size for another lap quilt. I also put together the extra geese units from Dad's Plaids, but I won't have a picture of those until they are together as a flimsy. 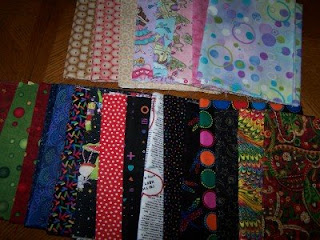 While watching the election returns on Thursday I was puttering around on the computer and put in an order for some goodies from Z&S Fabrics. They had some REALLY good sales going on, and I got a couple of backing lengths, but mostly half yard cuts of things that I liked. I found quite a few black and brights, but also a few Christmas fabrics and a collection that might turn into a princess quilt for my niece. I should start wrapping things up for the day, it's starting to get late and I'm feeding the neighbors dog while she is out of town for the evening. I have a long runs scheduled in the morning, so I need a good nights rest.
Posted by scraphappy at 9:20 PM

Weekends are the bomb!!!