I was up late last night watching election results and needed to do something to keep myself awake. I should have been grading papers, but instead I pulled out lots of old orphaned bits and pieces and started randomly sewing. 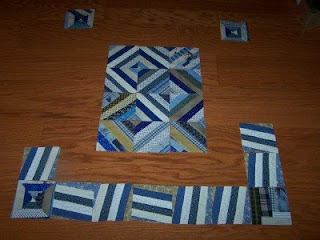 The first set are all of the leftover 1.5 strips from the Patriotic Log Cabin and Carolina Crossroads. All of them! I chained them all together and then cut out 5 inch blocks. Originally I had planned to alternate them with some nickel blocks that came as a charm pack, but when they were done, I thought they might look good with the diagonal blocks put together to make diamonds and the straight blocks forming an outer border. I think I'll put a solid inner border between and it will make another nice nursing home quilt. By the time Obama was giving his acceptance speech I had used all my strings and finished enough blocks to make the border go all the way around. 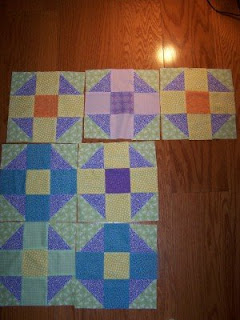 The next set I pulled out was a group of leftover HST from Orange crush. I pulled out every pastel 3.5 inch block I had and ended up with 7 shoofly blocks. I still have more HST blocks, so maybe those can season until something else pastel turns up in the scrap bin. 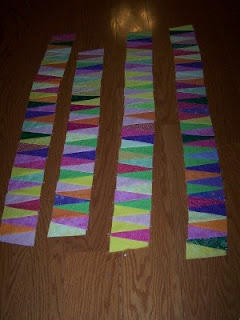 The last set are the extra Dresden Plate blades from Sydney's quilt. I kitted up another complete twin sized quilt, and still had LOTS of leftover pieces. They have been leaders and enders for a while now. This is about a third of what I have sewn, and I think I'll alternate them with white strips.
Posted by scraphappy at 6:29 PM

that's an awful lot of "extra dresdan plate blades" for a quilt top you made! wow...

What a great way to make some 'instant' quilts, very satisfying to use up leftover bits and bobs too.