And the answer is...D, none of the above 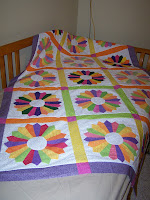 After much debate about which purple to use, I dug deeper and found a scrap in the incoming lap quilt fabric that was too small to use for lap quilts. Since it wasn't full width of fabric, I switched it out with one of the new purples and used it up for the outside lattice. It is more gray than the one I wanted to use, but hey, it's gone now, and that is a good thing. I couldn't try out the size on Sydney's bed because she is asleep in it, so I cleared of the daybed in the study and tried it on for size. A small outside border should make it just about the right size and it will be done. I'm thinking pink. I would bet a lot of money that Sydney won't use it because it isn't "comfy" enough. She has definite ideas about what she likes and doesn't. 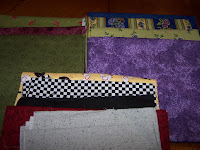 I took the dark purple along with some of the newly donated fabric and put together a few more sets for the Girl Scout Quilts. I can do some cutting this weekend and get those kitted up. 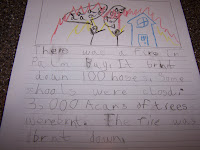 This was Ryan's writing homework tonight. They can write 5 sentences about anything they want. He was very curious about why someone would want to burn down someones house and how they could tell if it was arson. Then he asked what those people would do without shelter. The little people in the picture are screaming while their houses burn. All the fires are out now, only the consequences remain.
I missed the parent meeting for kindergarten orientation last night. There are 5 kids on our block that will be in kindergarten next year! I was the only one that missed the meeting, but I didn't want to get a sitter twice in the same week. I think I know how kindergarten works by now. Thursday is ballet and chess club and gymnastics. I am in the car from 12 to 4 on Thursdays with pickups and dropoffs. Anna and I spent three hours this afternoon trying to do long division while Sydney colored me a picture of fish. Tomorrow is graduation rehearsal and something called crossing over for the cub scouts. I'm supposed to bring a dessert. Kurt should be home tomorrow before bed time, I think I'll have a tiny shred of sanity left by then.
Posted by scraphappy at 9:43 PM

I'm sure it's been a long week for you and I know it goes without saying that you will be elated once Kurt is home. I hope your weekend will result in some relaxing and any "catching up" you may need to do.

And....I love the bright colors of the quilt. *whispering*...thanks for not keeping us suspence too long :0)

I think D worked out very nicely. It is a very pretty quilt. It is kind of sad when our kids have to be so close to bad things, but it sounds like Ryan asked some very good questions and had a lot of empathy for the people whose lives have been so altered. It must make you proud. I'm glad the fires are out, and your husband will be home. I hope you have a nice week-end with your family.