Today Was a Home Day 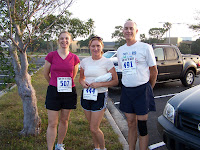 I had my race this morning. It was very nice. Three of my running partners were there, as well as my neighbor and a bunch of people from school. It is the last race of the season. Before long it will be way to hot to run during daylight hours. That leaves "o-dark-thirty" and "dead-of-night" if you want to put in miles for the next few months. 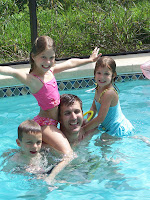 I spent most of the afternoon watching the kids in the pool. Two neighbor girls were over as well so it was a nice little impromptu pool party. I got most of the binding done on Carolina crossroads while I played lifeguard and referee, so it was a productive afternoon. 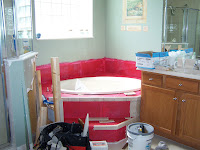 Kurt worked some more on the bathroom. He decided that he didn't want any more water leaking into the tub surround so he coated the whole thing with rubber. It is dark pink and looks kind of funny, but the tile will cover it. We are overly paranoid about water intrusion around here. After the storms we've lived through, keeping water out is always a big concern. I'm wondering if we could paint the whole house in pink rubber before next hurricane season.
Anna turned 9 yesterday. We are celebrating today. I told her she could choose what she wanted for her birthday dinner. She chose RJ Gators, a local restraunt that puts pies in your face on birthdays. She is looking forward to it. I'll be sure to post pictures tomorrow.
Posted by scraphappy at 4:39 PM

Glad you enjoyed your run. It seems so strange to hear that it will soon get too hot to run during the day - it occasionally gets too hot for a couple of hours around noon, but that's it. We are so lucky here in the UK, although a few areas had some dreadful floods last year. We are still talking about our hurricane in 1987!