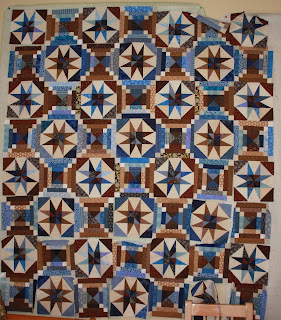 I was sure I would get the blocks done for Smith Mountain Majesty yesterday.  Life got in the way though, and it wasn't until today that I found those last few minutes between carpools to sew the rest.   Ryan wanted to see The Avengers in order to round out our Marvel superheros marathon.  He was pretty adamant about wanting to see it in 3-D.  Ryan doesn't get adamant about much, so we planned the day around that.  Since I was dropping off for math camp and the theater in is the same general direction, we spent the morning in my classroom finishing off the painting in the storeroom.  I had gotten most of it done during post planning, but the cabinet doors and drawer fronts and shelves still needed to get painted and put back together.  After that it was off to see the movie which lasted until it was time to get Sydney from her camp.  Theoretically there was still time to sew in the evening, but it would have taken some sort of energy or enthusiasm, and I was fresh out of both.  Have you ever had those evenings when you just sit on the couch thinking you are going to get up any minute, but never quite make it happen?
I think I'll go get the blocks pinned together now before they all start falling off of the wall.  I like to look at them for a while though and make sure that the balance and distribution are good.  There is probably enough pieces and variety in these guys that it would be hard to find a cluster of similarity anywhere. I still need to cut out the pieces for the borders, after that I can empty out the tub and figure out what is next.
I have been spending a little time for the last few evenings cutting out a BOM pattern that I ordered as a kit from Connecting Threads.   For some reason it just never moved to the top of the list.  I think about half of the blocks are cut out now and nicely organized in little baggies with directions.  Sydney wanted a shoebox for her magic show though, and the only one I could find was holding the quilt kit.

Posted by scraphappy at 5:02 PM

I haven't even dug out my SMM! WOW...you made nice work of that even with a "lazy" evening involved. It looks great!

Looking great! I don't remember who you said was going to get this quilt when you finish, but a blue and brown quilt is what the guys in my family proudly call a "Guy's Quilt".

Looking beautiful. I love blue & brown together. It looks so classy. BTW....you were FAST at getting this baby pieced. Good on you!! mdmontalvo@yahoo.com

You are a busy momma, sometimes you need to recharge by not doing anything but recharging. :)

Wow! I can't believe how quickly you put that together!!! I'm totally impressed! It is going to be absolutely gorgeous =^..^=

Smith Mountain Majesty is looking good and well on the way!

Now that the pieces/blocks for the BOM have lost their home, you'll have to move on with it!

Great progress! And an answer to your question regarding sitting around......

Most of my evenings are like that at the moment. I've got loads of hand sewing that needs to be moved forward, but no energy to do it by the evening.

That quilt is really looking great. With all that you are doing, I can't believe how quickly it is going.

Lovely quilt and so fast! you are getting a lot done on your vacation. I have lots of evenings like that... like last night. Oh well, I got to watch a movie with hubby and that rarely happens.

It's amazing...great job on the blocks!
I don't even know how you muster up the energy to do half the things you do! I found that age of parenting, and coordinating their sports and social life completely exhausting. But I was an "older" parent! I loved it when they were old enough to drive themselves around!!

Looking really good! I think we all need 'down-time' - even from things we enjoy doing.

I do find that some evenings the couch needs as much of a work out as does my sewing chair.