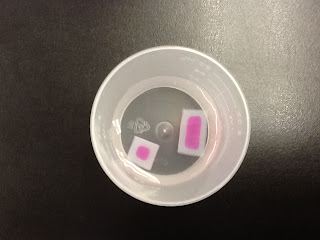 I had a great time workshoping.  This was a week long summer institute in preparation for a complete redesign of the AP Biology curriculum.  It was intense and full of good information.  See the adorable agar blocks we used to test the relationship of surface area to volume?  The pink is an acid base indicator which changes to clear as acid diffuses into the block.  I roomed with a teacher from our school who was there to do the calculus workshop.  Each evening, after dinner, I worked diligently on test questions, syllabi and such so that I could get up the next day and do it all over again.
The first half of the week was spent in constant dampness as Debby continued to move through the state.  Those were the days when we were all disoriented and wandering lost around the second largest campus in the country.  It made me thankful to NOT be a full-time student anymore.  By midweek though, the storm had passed leaving BEAUTIFUL weather behind.  We had learned to navigate the campus and felt confident enough to venture out and explore a bit. 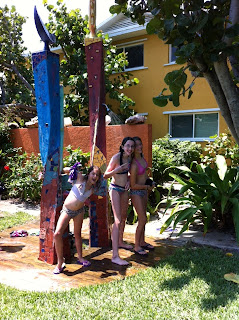 While I was off at my training, the girls were enjoying surf and art camp.  Like me, they started out dealing with the storm, but were able to get out and enjoy the beach by the middle of the week.  Wednesday they started the day watching a nest of baby sea turtles hatching and Thursday they saw dolphins and horseshoe crabs on a kayaking trip.  Ryan was at Mr. Science again, this time doing a crime scene camp.  Their final day was spent analyzing an apparent homicide to figure out how Mr. Science ended up dead in a pool of blood.   Poor Kurt was just plain worn out after all the dropping off and picking up.  He had a lot going on at work, but had to squeeze it all in between his chauffeur duties.  They were all glad to see me, especially because I was able to drive straight to the beach when my class ended and see the girls surf while also saving Kurt from yet another car trip.
Almost no sewing went on.  I did take my Dear Jane quilt to work on the hand sewing, but chose to focus on school work instead to get the most out of my time away.
Posted by scraphappy at 6:42 PM

Sounds necessary and fruitful but I think I would rather have been with the girls or Ryan! Rest up now!

A teacher's work is never done, we missed you. Glad it was productive so now you can get back to sewing and blogging and momming!

A teacher's work is never done, we missed you. Glad it was productive so now you can get back to sewing and blogging and momming!