I'm not sure how many wrong ways there are to sew a simple pieced sashing and cornerstones, but I must have tried them all.  I wasn't loving the scrappy sets made from 1.5 inch strips.  In looking back at the pattern, they showed a consistent red and light red which seemed like a good idea.  Sydney went with me yesterday and picked out a nice red with dots and patriotic star imprinted background fabric.  I promptly prewashed, ironed, and whipped up 49 pieces of sashing.  It wasn't until I sat down to cut out the blue pinwheel cornerstones that I realized the red was supposed to have been cut at 2.5 inches, instead of 2, leaving the final width at 4 inches instead of 4.5.  I almost started doing the math to figure out how to make pinwheels that would fit when I decided that plain blue squared look really good.  They look even better than pinwheels would look -- right? 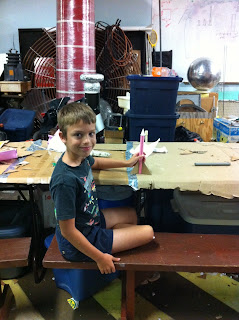 Sydney and I went to see MIB 3 this morning and then came home to a very surrealistic experience with subpenas. Ryan had another great day at rocket camp and is currently up in the toy room looking for something to launch into space tomorrow.  Anna was less than impressed with the Pythagorean Theorem at math camp, but said that lunch was super fun.  Summer is already zooming by and it has barely started.

Posted by scraphappy at 6:42 PM

Your sashing and cornerstones are perfect. Great choice.

I think the plain blue squares are perfect!

I agree the plain blue squares look so good, pinwheels would have been too much.

Less than impressed with Pythagorean, huh?..... I suppose you're willing to forgive that, right? At least lunch was super fun! :)

I like it with the plain squares, the pinwheels would have really upped the busyness factor. These seem to calm it down.

i like the plain blue squares, thinking pinwheels would have been too busy. Good job, sounds like a very busy summer is on your agenda for sure. I remember those days. Recently came across an old calendar with everything wrote in it for the year. I thought, WOW, we really did ALL of that EVERYDAY???? HOW?!?!!

The blue squares work for me - I think they look great.

Only quilters could read the above post and leave comments about plain blue squares instead of subpoenas. Or are they just more polite than the rest of us? :-)

I've found the Pythagorean Theorem is the quilters best friend for any quilt planning involving trianges.

Subpenas? That would be surrealistic.

Wait, what? Subpenas? I like what you chose for the sashinfs and corner stones.