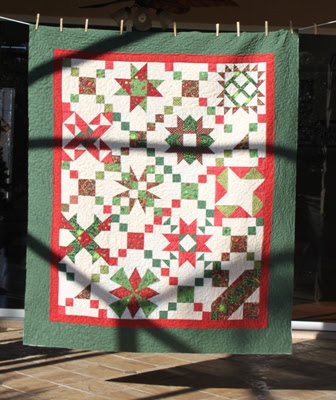 I've been calling these two quilts the Christmas twins, so as I was thinking about famous twins. Mary Kate and Ashley just didn't seem right to me. Instead I thought about the Bobbsey twins. I couldn't remember their names though, so I googled it. Turns out there were two sets of fraternal twins, the older ones were Nan and Bert and the younger ones were Flossie and Freddie. So I'm calling Christmas twin number one Flossie. 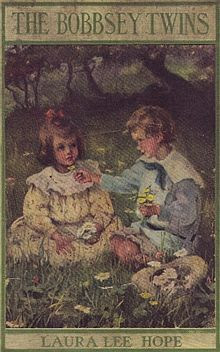 I decided to do a simple meander with cream thread in the middle. I know other people have huge thread collections and lots of options, but  I only have a few choices so far. 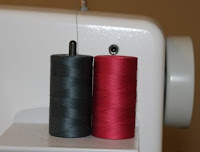 I was planning on using red thread in the red border and green thread in the other.  I couldn't find those so I chose some pink and blue instead.  It seems to blend in well enough to me. 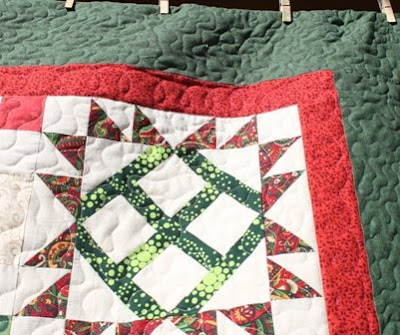 Once it was on the frame it didn't take long at all to get quilted.  The center section took an hour, and then I had to change the thread for the borders.  I'm not sure what the proper method is for doing the borders.  After doing the center I switched thread and worked my way across the bottom, up one side, across the top and then back down the other side in the inner border.  The top and bottom were easy enough, but I had to keep advancing the quilt while doing the sides.  Then I switched the thread and did the same thing all over again for the outer border.  Even though it seemed tedious, I guess it couldn't have been that bad, because I was done by the time I needed to get Sydney from basketball camp at 2 and I didn't start until after we came back from the vet and ate lunch. 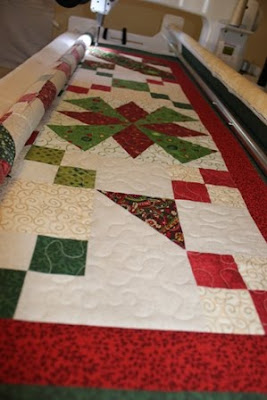 Now, on to the second twin.  It will be called Freddie of course and I think it has better behaved blocks than Flossie did.  Most of the blocks I ended up wanting to make more of were in the second quilt.  Back to borders I go!  I've got lots of Christmas movies recorded so I can do some binding tonight.
Posted by scraphappy at 3:54 PM

I really like this quilt and the quilting compliments it vewry well.

Way to go...you are making great progress this week!

Your quilting looks great. I saw one picture of your machine and it is a short distance, so lots of rolling. I had Premier and did the borders as I did the blocks, but that required thinking ahead a little and some math to be sure it came out even at the bottom!

It's a lovely quilt and I really like the way you chose to set the blocks. I had some of them made for me in an online swap I was in, so have to dig them out next year to decide what I'm going to do with them. I may well come back to you for tips on how to put them in this setting!

Pay Your Medical Bill using www.quickpayportal.com and Make a quick and fast payment online using the QuickPay Portal. Just find your QuickPay Code on your billing statement and and you're ready to go

Thanks for more visit.
https://dailynewswork1.blogspot.com/2021/10/links-details-of-vibe-crafts.html