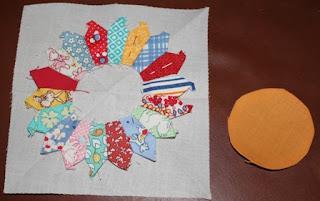 Just back from ice skating (as always). Poor Ryan went straight from Legos to ice skating without ever getting to come home in between. The girls and I had some down time though and I used it to get midget block 37 prepped. It is called Imperial Fan and looks to me like a Dresden Plate variation. The pattern calls for 20 fan blades, but I could only get 18 in. It also wants lavender circle behind the fan, but I decided to leave that part out. I used a freezer paper template for each blade and then ironed the point before putting a basting stitch in the top to hold it down. I spent part of my two hours at the rink sewing the pieces together.  I'll tuck in the extra part at I sew applique it down, so far it is just pinned.
Posted by scraphappy at 9:34 PM

You are doing pretty good with those Midget blocks. I've got all the patterns but I have a few other things I have to finish before I can start on them.

Oh gosh, I so remember those days of rushing around to get the boys to their activities as well as trying to keep up with my school meetings and work; trying to remember to pack extra sandwiches in the morning to tide us over after school if we couldn't get home in time for tea. I'm amazed at how much sewing you manage to fit in as well though, I was always too tired or snowed under with school work.

Wow! Do you ever sleep? I figure I'll be in a similar boat in a few years with the running the kids all over the place...
Love that midget block but scares me a bit... I'll be learning lots of new things by doing these though! Are you just going to do a yo-yo and pop it on top?
Love the letters in the last post. I remember reading about it on Bonnie's blog sometime last year and might just try my hand at it soon.