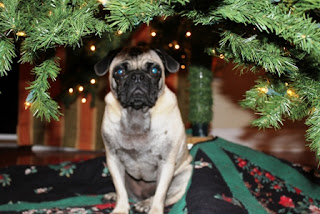 I think its going to be like this for a while.  At least until after Christmas.  I had to check the girls both out of school early to take Anna to the dentist.  Sydney went last week, but I had to reschedule Anna because of a conflict with her field trip.  I wasn't sure I could be home to meet the bus though, so I pulled them both out.  Ryan had Lego Club after school so we went from the dentist to get him.  Sydney had ice skating rehearsal at 5:45, but Anna's didn't start until 6:45.  Kurt was in a training session until 5:30, but it was too far for him to make it in time.  He was feeling pity for me though and took off early to make a 4:30 meeting back in his office which put him within driving range of home in the target time range.  He took Sydney up for the early rehearsal, allowing the other two to eat dinner and be at home for a few minutes.  Then I drove them both up, relieving Kurt so that he could make it to volleyball at 7, taking Ryan with him.  Sounds perfectly reasonable, right? The frightening thing is figuring out how I'll make it all work when he leaves on his business trip.  Single Parents do it all the time, surely I can manage for a week?  My mantra lately has been, "I'm doing the best I can, its just going to have to be good enough". 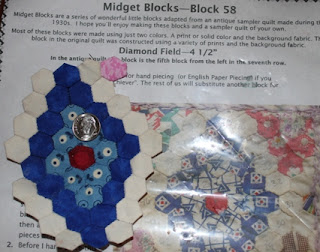 I the midst of all of that driving and sitting and waiting I got some more work done on Midget Block 58, Diamond Field.  I managed to loose one of the white hexagons somewhere along the way, but everything else seems to be fitting together.  It is taking an extraordinarily long time, I'm sure it isn't worth it, but it has become a bit of a challenge at this point.
Posted by scraphappy at 8:53 PM

I'm so glad that crazy part of my life is over. I remember it well and enjoyed every minute of it. Love the "little package" under your tree. lol

Your driving the kids around sounds crazy! I'm sure you will manage OK next week though. Great looking block there!