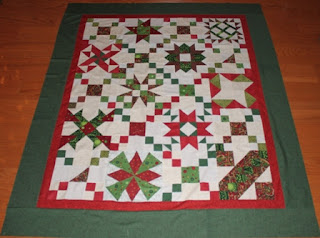 I would have loved to stay in my jammies all day and quilt like crazy in celebration of the first real day of Christmas break.  However, it was not to be.  There was a lot of driving and dropping off and waiting.  Sydney loved basketball camp.  She did a reenactment of a sharks and minnows game over dinner that was quite amusing.  Ryan did a terrific job during his Lego Robotics team Skype interview with the pediatric Celiac specialist.  Mostly he just enjoyed playing with other people's Lego Robots though.  Anna had a great time at her ice skating party.  Dad did pick up duty and she showed him the shoot the duck move she has been working on.  Amongst all of that we were home long enough to eat lunch, sweep the floor and fold a load of laundry.  I think tomorrow will be better, just basketball and a trip to the vet.  I'll have to put on real clothes for those, but I should have a little time to sew.

As soon as dinner was cleaned up and the kids were settled into bed I started cutting out the borders for my twin Christmas quilts (they are fraternal, not identical).  The bright quilt is now bordered and ready to go on the frame.  I picked out some flannel to try on the back.  It feels SO soft. 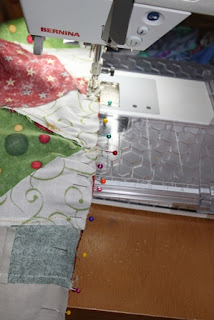 I loved making new blocks each month and quilting along with everyone else doing the Amy's block of the month.  I tried out some new patterns and found a couple that I would love to make into an entire quilt.  There was only one block that I wanted to toss out completely.  If I weren't so stubborn I would have replaced it or redone it so that it was somewhat close to the right size or at least flat or a little square.  I now remember why we don't all use templates anymore. It was called Florida Star though, so I think I had to keep it.  I am amazed that I managed to get it sewn in and bordered without any puckers, but I'm still wondering how it will ever lie flat.  My plan is to quilt it into submission.  Now I'm sitting here debating putting the first border on the other quilt versus going to bed.  I think bed is going to win.
Posted by scraphappy at 10:47 PM

It looks great! Good job!
I did stay in my jammies all day yesterday-the whole family did. It was great fun!

It seems like you deserve to stay in Jammies all day. You are on vacation. But a busy mom never rests. congratulations on getting what you did done.

I love the borders on your quilt. You had a busy day, but maybe there is a stay in your jammies day in your future.

It is fabulous. You have more energy than anyone!! Today is my stay home in comfy clothes day. I love those days! Flannel backings are my favorite.

Yeah...Florida Star was one of my not-so-favorites either ;0) SO glad you decided to keep it since YOU were my Florida participant!

Catching up, and both of your Christmas Twin quilts turned out BEAUTIFULLY!!!! A sample in Christmas colors just seems right!