I was so happy today to have the sewing day that I had been looking forward to.  I was tempted to stay up until the wee hours last night and take a look at the lunar eclipse, but  knew it would have left me lethargic all day, so I got an early night and was up sewing bright and early instead.  Kurt was nice enough to help with the driving around today which left me plenty of time to sew myself silly.  He even made it home early and we all went out to dinner to the kids favorite Chinese buffet which had been closed but is now open again under new management. 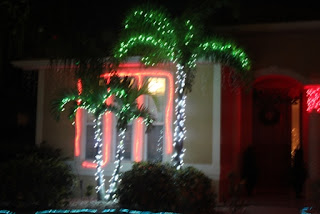 After that we drove to look at some Christmas lights.  I firmly believe that Christmas lights just don't look right hanging on palm trees, but it's what we've got.  One of Kurt's friends from work did a big fancy display which is  synchronized to music he broadcasts on a special radio frequency.  Sydney thought it was truly awesome.  She is at one of those fun stages where everything makes her happy.  Anna thought it was a really geeky thing to waste time on.  She is at the age where everyone is lame. 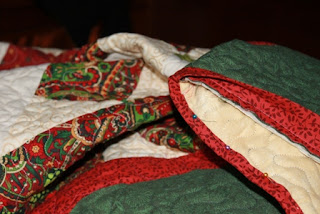 Now I'm sitting here with a freshly finished quilt starting on the hand sewing of the binding.  I'm always tempted to sew the binding down by machine, but it is such a joy to sit and admire a new quilt while sewing the edges down.  I like to check for stray threads while I sew.  It gives me and excuse to watch lots of movies and relax for a bit.  What could be better than that?
Posted by scraphappy at 11:08 PM

I meant to do that as well, but forgot about it until I heard it on the radio this morning, oh well next time maybe.

Just One More Thing said...
This comment has been removed by the author.
Wednesday, December 22, 2010

Just One More Thing said...
This comment has been removed by the author.
Wednesday, December 22, 2010

I agree with you about sewing on the binding by hand, I enjoy the slow finishing process, reflecting, enjoying and checking the quilt, and starting to think ahead to what comes next.

You are so right about hand stitching the binding. It is a nice way to say goodbye to a friend and as long as it takes to make a quilt they do become friends before they are done.

I think hand sewing down the binding is one of my favorite parts of the quilt process! Glad you had a great day of sewing. Thanks for the comment on my blog... the kids are better and should be back to their normals selves in the next day or so. I can see that pinwheel quilt in my head and hope it comes out as good as I think it will!