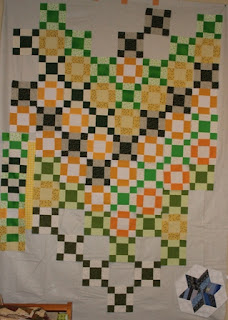 I had an overwhelming urge to start something new this weekend.  Not because I had finished anything old, just because I could.  It started simply enough.  I was sitting at an ice skating rehearsal with my cutting mat and some extra fabric from RRCB step 4.  The girls still had an hour on the ice and Ryan was busy playing games on my computer.  So I sliced up some green and neutral fabric into 3.5 and 2 inch strips.  The nice thing about these blocks is that even though they need two strip sets, you use about the same amount of each,  making it is easy to plan.  I love making nine patches, but its a chore to make matched sets when you need twice as much of one arrangement as the other.  When I came home I found some yellow to go along with the green.  I seriously considered red for a Christmas quilt, but I think the yellow is cheerful.  I'm still playing with the layout, it was a straight diagonal at first, but now I'm working on a V like chevron shape.  Maybe if it gets big enough I can work on a W or M.  Maybe I should do some math and figure out how big I want it to be?  Mabye I'll just keep going until I get tired of making blocks.
Posted by scraphappy at 6:23 AM

Nice blocks and look at you starting a 'new' quilt! Can't wait to see how all her steps will go together. I envy you the jammy day of sewing... maybe in a few years I'll be able to do that sometime.

Looks great. It occurs to me that you get an awful lot done while doing the mom transportation thing. Do you have an awesome kit that you've put together. I can't even imagine getting so much done anywhere and everywhere.

HaHaHaHa......this is just like me, I don't have enough going on so I start something new. :) I like the yellow. This is a fun quilt.

There is just something about starting a new project!! Looks great :)

Love the blocks...and I think it's just fine to start something new when you've got an idea and the urge strikes.

Talk about multitasking! I like those blocks and the design you're creating. Looks like you could go a kinds of ways.